The last survivor of the Ws

I was born a girl called Hope to a family named W. My mother was Lily and I was her last girl before she reached the age of 40. We wanted to move, since our Eve Gi settled in a location without any water. My mother also cared for my cousin, who died of starvation at the age of 6 and who’s mother was suffering from the afk-syndrome. I also had a 21 year old sister, who died from a rattle snake bite shortly before we wanted to embark. She had just given birth to a baby boy. He ran through our camp. Maybe he ran away, maybe he just didn’t see me, standing there with a gooseberry.
Eventually I was the last girl left. So I took my mother’s backpack, packed some tools for a new base camp, and started walking south, checking the borders of every swamp or green meadow I saw. Eventually I noticed some chopped trees and other signs of civilization! I followed the tracks and found a little town with a smithy, a farm and a sheep pen (one of the old oven base ones, which was pretty cool to see). Of course I decided to stay there and started looking around the town and started working on expanding the sheep pen a little, since it was only a 2×3. As I was working, my first child was born, a hard working boy. If he had been a girl, this story might have gone differently. The next kid I had was a girl. I saw a B3 on her, but I named her Hope and pleaded her to be a decent player. The server wasn’t very full when I joined, so my hopes of having another girl weren’t the highest. I found her later, afk like my aunt had been, standing around fully clothed with a bow. She died later on the same spot. My third child was another son. As I picked him up, it became apparent that the did not want to be picked up. I’ll refrain from reciting the exact words he used to express this. Because I’m sick of naughty runners I held him anyway until he was 3. I dropped him off in the northern swamps later, so the little rascal wouldn’t mess with us to get revenge for his 3 stolen minutes of lifetime. I found his bones near the town later, so he tried to come back apparently and I doubt he had good intentions.
The most tragic of the lot is probably my last daughter. She was born when I had just dropped off the last boy in the swamp, he was still violently cursing his mother for keeping him alive, so I thought I owed her an explanation for the whole scene. I told her that he had tried to run, and she promised me that she wouldn’t do something like that. Well… She didn’t. As my hair grew white I went to her to give her the crown I had found upon my arrival, to make her the new and only mother of our family. Just as she put it on her head, she fell to the ground. Starved.
My first son gave up working on the camp soon after. Once again I was alone.
I had 10 minutes left so I made some paper to write a note answering another note that was left in the town by someone who called themselves the last tree. I also went on a last journey to get myself a petal, so I could maybe be reborn there later, it was a lovely little town after all. It doesn’t deserve to be forgotten. 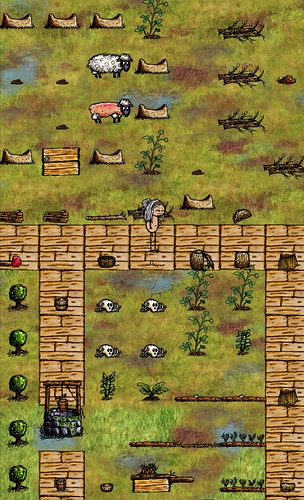 What a sweet but yet sad story