The life of a Bird

I appeared in US Beginner, named myself Eve Bird, and began to run. I ran through praries, deserts, jungles… but no grassland. There were many signs of people, at one point I even discovered a snare, abandoned in an empty hole. Replacing the trap on the next rabbit family, I continued.

I had a son, I called him RedBird. He was a quiet boy, never spoke a word. We ran together, following signs of life to a patch of grass. There was no water, but would make a good base. I considered going back for the snare, but decided it was too much of a risk over such barren land.

My son headed south while I looked north, and had my only daughter, MagentaBird. I carried her while I scouted, when suddenly a bear attacked out if nowhere! I was caught off guard, and dodged those terrible claws more by luck than skill. I ran to warn my son… but he was gone. I never saw him again.

Saddened, I decided to move on and came across some felled trees! I followed them, hoping for civillization, but the trail ended… at an ax. I set my daughter in the desert by a banana tree. She ran south but I wasn’t worried, she wouldn’t go far, right? I grabbed the ax.

When I returned, she was gone. I couldn’t find her. Saddened and enraged that the Almighty Server had taken another child, I swung at a mango tree, felling it in a single blow. Sense returned. It’s foolish to waste uses.

Again, I ran. And ran, following cactus flowers and pine needles. I had another son, and named him Blue. Another quiet boy. I abandoned the ax, leaving stacked stones to mark my way. Until I came across a camp. It was like something from a horror film- ghostly quiet, the bushes long dead, and skinned rabbit carcasses spread out as far as the eye could see… But I saw my hope here, and made a home marker.

My son was old enough to feed himself, so I placed him by a wild bush while I explained I would go back for the ax and return. He only stared at me. I crossed my fingers and ran.

My markers served me well. Ax in hand I quickly returned to the camp to find the remains of BlueBird by the berry bush. I could not tell you why he refused to eat, but once again I was alone. I was 35 by now, and hope for my lineage was failing.

The nearby prairie was a wealth of wonders. The body of a slain bison was an imposing landmark, proving the courage and strength of the ones that had been here before me. With plenty of carrots and bananas to keep me fed, I began to add my own rabbits to the grisly collection.

I had no family, but darn it all, I was going to have a backpack. Then, a miracle. At 39, I had another son. It didn’t matter to me in the slightest that my line was doomed for certain now, because I had family again!

But I was old, and could not feed little GreenBird. Quickly, I ran to the nearest berry bush, when the body of his unfortunate older brother still lay. I popped a berry in my youngest’s mouth, concerned that he too, never made a sound.

I told him that he needed to speak, that he must make a sound to be fed! He must move, do something, anything! Silently, he keeled over. My final hope, dropping dead in the grass.

Still, I would not let the depression consume me. I would finish my bag. I would make the bellows and finish the kiln! I would make this spot an even better place than I found it, and the next traveler to come will build atop that!! I did all those things.

My last act was to bring back a single iron ore- all that I could find in my failing age. Wheezing, I set the iron ore by the charcoal filled kiln, ready for someone to remove the cover and bring this camp to the iron age.

I set down my basket, feeling cold and hungry. Then, I noticed a berry bush I hadn’t seen before, right nearby. Had that always been there? I began to walk towards it. I set down my backpack. The berries were only a few tiles away now, calling to me. I stood before the bush, reaching out to take the beautiful, red morsel. As I touched it, the world went black as old age claimed my soul. 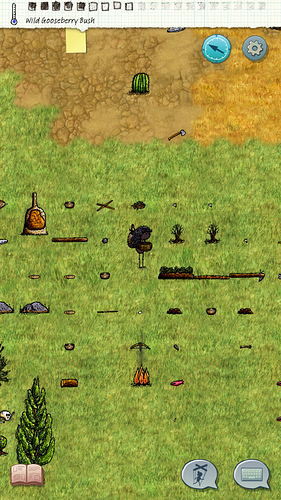 This was a beautiful story… what a shame I found it so late.