The Story of Marion Hide

There was silence… and then there was something! A baby was raised up by it’s mother, it’s vison still blurry. “Where am I?”,”What is this place?” Thought the small child. Then the toddler’s vison focused and saw 2 figures, his big sister and his little sister. Then suddenly, WHAM! He was dropped to the ground. He looked behind him. His mother had died! He was starving, he sat there an embraced death. Then suddenly, his big sister fed him a berry, then another, and another. At that moment, he realized he was going to survive! His sister told him to follow her, and was led to a open part of the forest. The now 3 year old child had noticed that the area had little water and food, so he notified his big sister and they began moving. He had started wondering where his little sister was, he asked his big sister, who he now knew was called Sara, and she said that she had run off, having no hope of living after mother had died. He felt sad knowing that he couldn’t have saved her from her horrible fate and kept moving. Sara, being much older than Marion was also much faster. Marion started to lag behind, eventually losing sight of his sister. He called out, “Sara!”, no answer. He tried again, louder, “Sara!!”, no answer. For the first time in the little ones’ life he had a new emotion, fear. He was alone in a desert with only him and the supplies they brought on the trip. He walked and walked, he never found his sister. Eventually he came to an open spot in the grasslands next to a swamp. He waited a while, hoping his sister would stumble upon the area and be reunited. At this point Marion was never given a name by his mother, and named himself “Marion”. Marion knew if he just stood there he would not survive, so he got to work. He spent hours sharpening a stone against a big rock. He cut down reeds and gathered clay. He made a basket to carry bigger amounts of items. Marion started to build, by the end of the week, he was successfully made an adobe kiln. He went to gather some clay to turn into bowls and plates. Many years passed, Marion was still anticipating the return of his beloved sister. He had wondered what happened to her, maybe she grew up and started a family, maybe she built a settlement like him. Then came the dreadful thoughts, he thought that maybe his sister had starved, or had been eaten. Whenever he had one of these thoughts he felt weak, and dead inside. As he continued with his life, he pursued a new goal, Forging. For this he had to make bellows, made with a water pouch. He knew he would have to travel far and wide to find the rabbit skins required for a water pouch. At first he felt reluctant, then brave. He gathered a hefty supply of food and a snare and went off with the items in his basket. After many years of travel, he found the plains. He snared a rabbit hole, baited it with a wild carrot, and sat quietly behind an indigo bush. As soon as he heard the small squeal of the rabbit, he knew he was ready to make bellows. He got home many years later to see his hermit settlement was not touched and will most likely not be touched by another soul for centuries. He checked on his farm he made a long time ago. His berry bushes had all grown delicious berries! He thought to himself that he would never be short on food again. He put his basket down and examined the contents. “Huh? What’s this?” He exclaimed. A carrot seed head had fallen into his basket. He was all too familiar with seeds, having planted many berry bushes from seeds in the past. He immediately knew this was a seed. He gathered dirt and tilled an exclusive row for this foreign plant, and he planted the seed into the earth. At this point, he had made his bellows required for forging. He was getting old, and knew that his time would soon be up. He spent his last days toiling at the forge. At first he made a smithing hammer, he assumed that a puny stone would not be enough for making his axe he so desperately needed. After making the smithing hammer, he noticed his carrot plant had started to seed, he was overjoyed! He gathered more dirt and created more rows for all the carrots he could ever want. After even more long hours of toiling, he created an axe and got busy cutting down trees blocking his view of the forest. He arranged the food he collected from the trees into neat piles. Now, Marion had become 58 years old. He knew his time is coming fast. He spent his last two years of life tending to his carrots. Then on that one fateful day, while Marion had been watering his carrots. He felt himself collapse to the ground, and silence was once more.

Just noticed how long this is, cool. 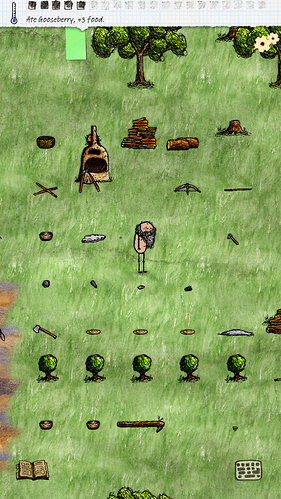 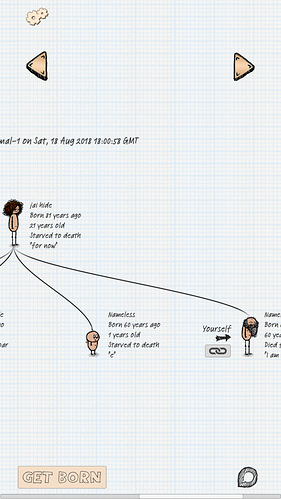 Did you guys read the whole thing lol
Is very long

such a bitter Sweet story.
I wonder what happened to your sister, the family tree must have given some useful information

Sister had died from a hog cut trying to find her new home, Marion had waited his entire life for something that would never come.

I was Judy Hide, don’t think it was the same family tho.

Did you guys read the whole thing lol