The story of the convicted eve

As I entered jp-normal-2, hoping to have a fun time, I was an eve, I had spawned in the middle of a Japanese town, “ how fortunate” I thought to myself, then my son came. I named him alps. As soon as he was born, he asked me this question, “do-you-kno-w-how-to-sin-g” i was puzzled, and quickly pushed the question aside. Not long after Alps had grown, I had a daughter. I named her Elle, my favorite girl name. Then Alps appeared and asked her the same question she had asked before. I went to do some work, but then stopped as I saw horrifying text being said to her. “I will kill you” “haha” “I know how to sing”, I suddenly grabbed the bow worried for me and my daughter’s safety. Immediately, Alps came over and said “hey mom can I borrow the bow I need for hunting” at once, I shot him, the members of the village had started screaming in horror when they saw the bloody red body of my terrible son Alps. I almost starved, but managed to get over combat stress before I starved, that was the day it all started. I had just worked around the city, forging tools, fixing berries, the usual. I had seen a young girl with a bow, I was wondering what she was doing with it. Anyway, I had picked up the spare bow and arrow as I was intending on getting a goose and making wolf hoods. Then suddenly, the girl started following me, bow loaded, I started running as fast as I could, and managed to get away from my attacker. I stopped running as I came upon an abandoned wolf camp, I stopped and ate from some nearby berry bushes, I was scared to go back to the village, but I must. Later, after I returned to the village, I had stopped by the nursery in helping nurse the babies. As I was holding the small child in my arms, a woman with long brown hair approached me with a loaded bow, it was the girl who tried to kill me earlier! As I saw her arms move to shoot me, I closed my eyes and embraced death, but death did not come, she full on intended to shoot me, but a bug had prevented her from doing so, somehow, because I was holding the baby, the arrow did not kill me nor the baby. The arrow had simply disappeared, “wierd…” I thought as I put down the baby to ask why she wanted to kill me. As I took a closer look at this attacker, I learned her name was Elle, and she had wanted to kill me ever since the beginning. Elle, was the name I gave my first daughter, the one I had protected from the evil wishes of my son, she told me about getting revenge for her brother. I explained to her about the threats he had made torwards her. She understood and she apologized, it was alright, I was a simple mistake, but one that could have cost my life. Many years later, I had come out of the woods with a basket of iron, getting iron for the camp. I immediately saw a boy, with an arrow potruding out of his chest, he loudly exclaimed ■■■■■■ as I asked him questions about who had killed him. He did not have enough time, and passed on before I could get an answer. Soon after, I saw a young woman get bitten by a snake and perish, I wanted to protect the village, so I decided to make a knife to rid the camp of snakes. First, I grabbed the bow and looked for a goose, traveling all around camp trying to find a goose, at last I had found a goose, but then I noticed a woman much older than me had been following me, I shook it off as nothing, and killed the goose to bring it back to camp, I roasted the goose over embers and went to show the farmers my accomplishment. Nearby the farm I saw a lonely baby, abandoned by its mother, so I decided to raise it as my own. I fed the child berries as it got hungry caring for this baby as he grows. Then, the same woman who had followed me to the forest had grabbed the bow and had been in the area of my and the baby, I continued to raise the child, I heard her discuss something with another person in Japanese, assume she was talking about killing me. Then, while grabbing my last berry to feed to the abandoned child, I was shot in the chest, with my little remaining time, I limped over to where my daughter was standing “please, continue the family line for me, I have faith in you” I said as my bones collapsed to the ground. And that is when. I was angry, I couldn’t get revenge in my next life because she already died. So I just laid it to rest and went to sleep. 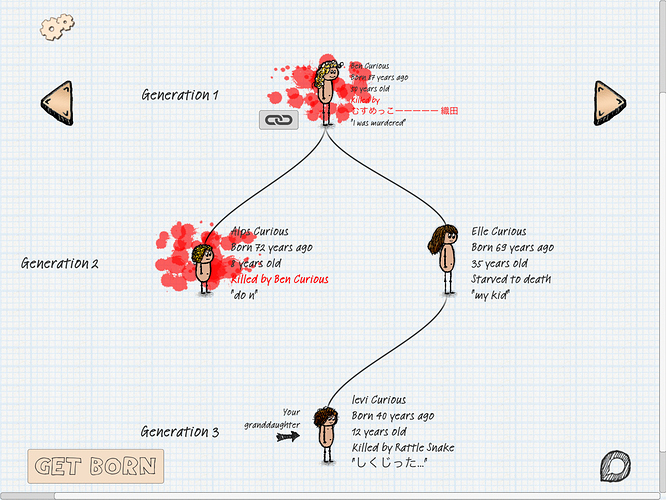 What a great story!

Cool story there. It seems a lot of people wanted to kill you over the course of an hour : ) well done for surviving so long. Maybe we should get better at healing people on the mobile edition to stop this sort of thing from happening so often. To heal a stab wound, use a sterile pad and then a needle and thread. For an arrow wound, use your hands to remove arrow, then use a sterilised knife to take out arrow head which you can then remove with your hands. After that apply pad and needle. You can get a sterilised pad by putting a ball of wool in some simmering water. Sterilised knives are made by adding a knife to a fire. Hope this was useful to you all.