Born a girl in a sweet little town founded by Jill Garcia I grew to maturity and birthed a girl child who’s first move was for the bow. I warned the villagers the child would be a griefer and not to feed her but someone gave her a berry just in time to save her life.

The first thing she did after being saved was make another move for the bow. I did what I felt had to be done and killed her.

Almost immediately after I recovered I had another child. As I picked him up a new Eve spawned into the town. She grabbed the bow and began her murder rampage. It was my griefer child, reincarnated as a new Eve! I picked up the knife but, unfortunately, she had the distance advantage of the bow and I lost the battle.

I was born back into that town, my mother having just spawned there herself. She carried me north, away from the mayhem. It was on the edge of a desert and a plains with plenty of food and milkweed that she told me who she was and that she was the founding Eve. Revenge would be ours, she said.

I helped gather the materials to fashion a bow and arrow and my sister was born. Too young to wield a weapon myself, my mother headed south while my sister and I stayed in the north. When mother failed to come back I headed south to deal with the murderous Ola (which was what the griefer named herself). In my anxiousness I failed to see a snake. I returned to my sister telling her it was all on her and to go seek revenge when she was old enough.

I was born to that village yet again. This time to the murderous Ola. “You are a boy, come back as a girl.” she told me. Opportunity for revenge lost, I thought. I died from starvation. Born again as a girl, lo and behold, to the very same murderess who killed my family! My opportunity to avenge my family had come!

My fiendish mother told me tall tales of how the village was near destroyed by a horrible griefer who died of old age. “I did not seek revenge.” she lied. I decided to bide my time as we set about reviving the berry farm, starting a carrot farm and cleaning up. She gave me her backpack containing the arrows and a knife. She had another knife but must have felt secure as she left it nearby in a basket.

When old enough to wield that knife I stopped her on the pretense of discussing the carrot farm. It was when she was distracted, in forming her answer to me, that I stabbed her in the gut and announced I knew exactly what she had done. A lying liar to the bitter end the horrible woman who birthed me feigned innocence. I did not keep any of my children, not wanting to carry on the shame that was my familial line.

I cleaned up the village and arranged the bodies of my original kin, but not my mother, in a giant J in tribute to the founding Eve.

Here’s to you, Jill Garcia. 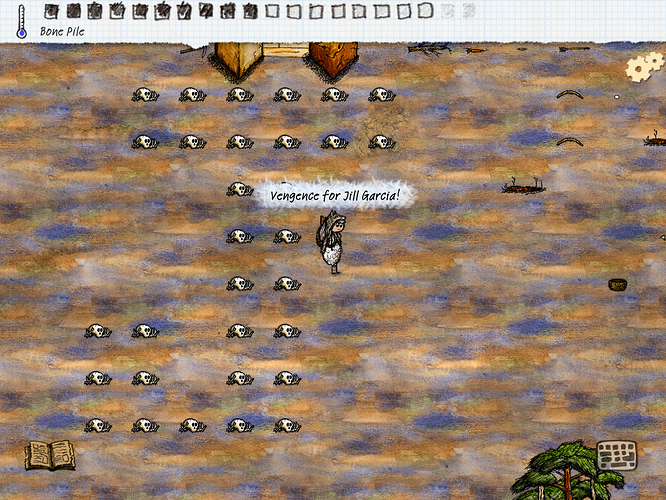 OMG! I was your sister. I tried several times to kill her, and I am so glad you finally did!

Jil Garcia seems to have a ongoing vendetta. i resently spawend in her family and soon after that 2 griefers showed up and killed the family by releasing wild pigs in the city: https://onehouronelife.app.link/jQG6tK0x1S