What's your funniest moment in OHOL?

Mine is we have bonsai in the village, someone makes it but I didn’t know who. But then this guy pick it up, hold for a long time and start talking “. It’s mine. My bonsai. My precious”. That guy must be fun at party.

Recent life, nicely developed Eve camp ready for sheep pen (which I built while raising children that life) and my brother, a fabulous jack of all trades and hunter who desperately wanted to kill a baby. It was a running joke, where he’d join me by the fire with my most recently born child and warn them that he’d kill them if they were bad. “And eat you.” I’d add. “Mmmmm, tender juicy baby bits.” We had a lot of fun and, yes, eventually we let him kill one of my last boy children, since all my daughters seemed to be dying RIGHT ON TOP OF THE BERRY FARM! and we needed a girl. We accomplished a lot and had a great deal of fun.

Sounds morbid and got quite dark towards the end but great fun anyways : )

My funniest moment was in a similarly advanced settlement. I was in my twilight years and I was hanging around the berry bushes annoying the young people with my old buddy Stephanie Raddish. It had been an especially eventful life, having played a large part in constructing the town sheep pen and leading a bear away in my middle age. Now the two of us could settle down and regail the others about the good old days. My funniest moment was seeing a girl walk past with a seal skin coat and calling her a youngster who doesn’t know what it was like for our generation “back in the day”. We’d both been naked from birth to the grave. Sure, as the girl quickly pointed out, we could have just clubbed a seal or something but then where’s the environmental spirit in that? Plus I was busy trying to forage adobe for the sheep pen most of the time.

My funniest moment… that would have to be killing a domestic goose. Every time I would put it on the stump, it would jump off. I was chasing around a goose for a good 5 mins before finally killing it.

Actually I have a new one, this. 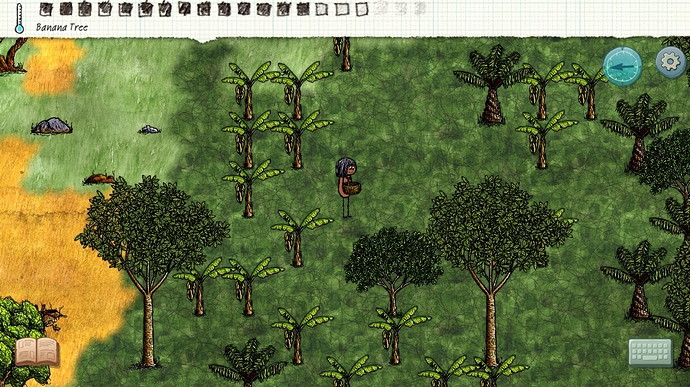 to be killing a domestic goose.

That’s also my funny moment.
We have running away goose and even though we can pick it up and put it in again, the pen simply too small so we decided to kill it. I told my sister “let’s kill the goose”. She followed me with axe. I grab the goose and put it in. We failed on the first try. But on the second try. Oh my god it was so funny. The body running around headlessly. My sister said “oh… It running around.”

One time I started in village, but I heard bell, so I ran to town. On the way to it I found dead body with crown and some other stuff, so I took everything, went to my destination. It turned out that town is crowded with the ‘elite’ (ppl with crowns, busy mainly with chatting) and ‘workers’. Then I have kids and I pretend before them we are royalty and we will rule this town. xD I tell each of my kid he/she will get my crown from me, they were excited about it. I took it off before I die and someone from fam grab it.

In next life I was born in the same town, but different family, as daughter of one of kings (lol). I spot my previous son. I noticed that he’s holding one of ‘real royal’ baby. I spoke with him, said who I was before. I thought he was clever and he want to get rid of girls from rival family, but no, he said he’s lonely so he want to have bby. xD

He was arguing with ppl about why he act like a kidnapper, I was defening him. Mainly I try to do everything to benefit my previous family, undercover. xD Ex-son told I am his mom, my present dad (lol) said he must be crazy and we laughed about it. My trolling was real funny to me.

I was once born in a fairly developed town, a few seconds younger than another kid. We were taken to the elder, who was currently in the process of stabbing a man while yelling, “Heathen!” All around were random people shouting, “For Mother Russia!”, “Long live Mother Russia!”

The elder asked our mothers if we were “True Believers”, and both our mothers assured that, yes, their children were perfect, raised as believers. He asked us, to which I quickly responded “Y!”. The other child… said “No”.

You can imagine his fate. I got his hat though!

Spent that life making stew for all the crazies, and there were quite a few of then. It was surprisingly funny, despite all the murders, as everyone praised Mother Russia.

If you hadn’t written this back in Feb, I’d think I saw you do it recently. Dang geese.

I once adopted a bb girl as a kid. She was abandoned and I was holding a bowl of berries to take to nursery. We got married and lived a nice life.