Should we get rid of oven base pens?

The Adobe Oven Base blocks movement, and is very easy to build. Therefore it is often used for sheep pens. It is efficient but ugly, and not really intended. The reason that it blocks movement is that it would look strange for people to “pass over” the oven base. However, doesn’t it look much stranger that you can keep sheep in a pen made of half-built ovens?

It is supposed to be a lot of work to get domestic sheep, so the oven base pens are an exploit to make things quicker than intended.

We could either make Oven Base not block movement, so it would not hold animals in, or we could make it decay to adobe or rubble after a few minutes, unless you build the full oven. Both would solve the issue of low-cost, ugly sheep pens. What do you think?

I like the idea of oven base decay to adobe. Players won’t mistaken it for griefing when its adobe instead of rubble.

Also there can be used fences or boxes for making a sheep pen. Both are better options because you can have a horse tied to the fence or you can store stuff in boxes.

Maybe there could be a new type of fences made with rope. The rope connects the poles.

decay to adobe or rubble after a few minutes, unless you build the full oven.

I wouldnt mind this idea.

What if you changed it a little bit. We still can make pen from adobe, but instead of oven base pen, we build a adobe wall. Yes we have adobe wall already, but it’s too high and too much works. But if you want to delete all together, I wouldn’t mind either.

decay to adobe or rubble after a few minutes, unless you build the full oven.

I don’t mind, but it would be nice to have a new fence object.
Preferably at a lower cost.

What about a prop fence out of basic materials? Will only be a temporary 1 hou to give you time to fully build one

maybe «Partial Adobe Wall» and «Oven» should also be walk through then, so it wouldn’t be used as sheep pen. because they would look even worse for a pen

I’m aware of that.
I was referring to the variations; there is a fragile but low cost Property Fence in OHOL.

I don’t care. If it is changed, it will be adapted.
However, wooden fences are expensive.
Even in the case of boxes, small villages often have few ropes.
Since soil cannot be made without sheep, the conditions for land selection are likely to become severe.
I want something that can be used for temporary construction.
Oven base or fence?

yeah i get that @mia.a. it will have an influence on the game and it’s hard predict how players will adapt to it. sometimes i don’t even build a pen and people get mad

me too. Sometimes sheep are grazing when there is no soil.
I inform it to all villagers not not to get yelled at.
When I say grazing, I’m usually surprised.

It seems unexpectedly difficult for many people to think and respond according to the situation.
Therefore, the ease of creating a pen is important.
I think grazing probably won’t be a standard.

Yah i dont like the looks of adobe oven pens either.

But i feel like low cost pens are a part of the game now… Maybe we can add a adobe fence that decays after about an hour?

That way there’s still a cheaper fence option but its not a perminant structure.

I personally feel like making adobe oven pens are still close to the same difficulty as building a proper fence pen the only difference is that you can skip the process of iron tools. It still takes a single player almost an entire life to build either type of pen on their own.

maybe we could just skip the oven base thing. nobody needs that or the look of it.

oven wont be upgradable to forges anymore.
its not a build up thing anymore.
its just 1, 2 or 3 adobe make different things when hit by rock.

Just leave the oven base thing away. skip that part entirely. its just not in the game anymore.

I may be in the minority here, but I’ve always like the adobe pens. They’re easy to build, easy to dismantle and I’ve honestly never thought they looked that bad. A decaying adobe fence wouldn’t be terrible to me though. Add some water and smack it again to gain another hour, or just get on with the upgrade.

I think this is the user’s creativity in the degree of freedom of the game. It’s really great to decorate the village with things that you don’t know how to use. Without trees, I think it is great to use things around you. 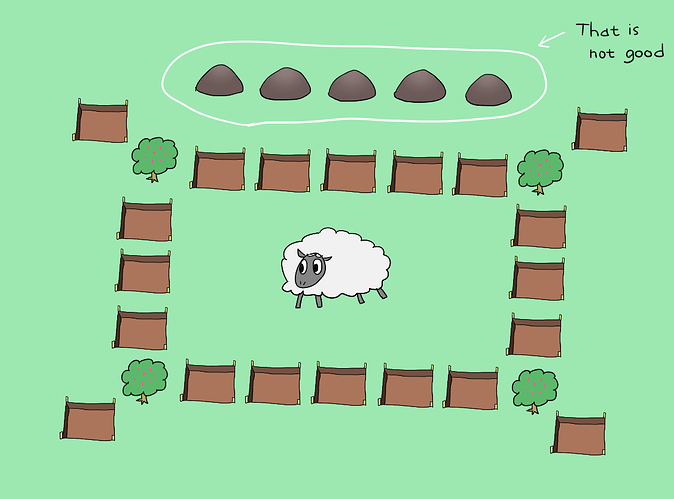 With Japanese servers, the number of villagers increases quickly, so it’s important to breed sheep quickly.
Once the clay base is no longer a substitute for the fence, I think I’ll start using the holes.
But the mud comes out, and I think it makes the village look worse than a clay foundation… (It’s a much later generation that can take advantage of the mud)
I’d love to have a nice new fence to replace the clay base.

I like this idea. The pen with fences make their look more beautiful and consistent!
Instead, I’d like new items to hold animals which we can get easily than the fence kit in the begging of family. Because straight shafts and irons are precious for them.

i think bell tower base looks weird too for building houses. can we make them so you can walk through?