Maybe I said something too serious（I am sorry），but they did ask questions, right?

Maybe I said something too serious（I am sorry），but they did ask questions, right?

Indeed they did. I stand corrected in that regard

There are too few lily flowers（Spathiphyllum）. Be able to put the lily seeds in the basket. Lily petals disappear too quickly. Make the tombstone removable. Be able to lower the bone from the basket. 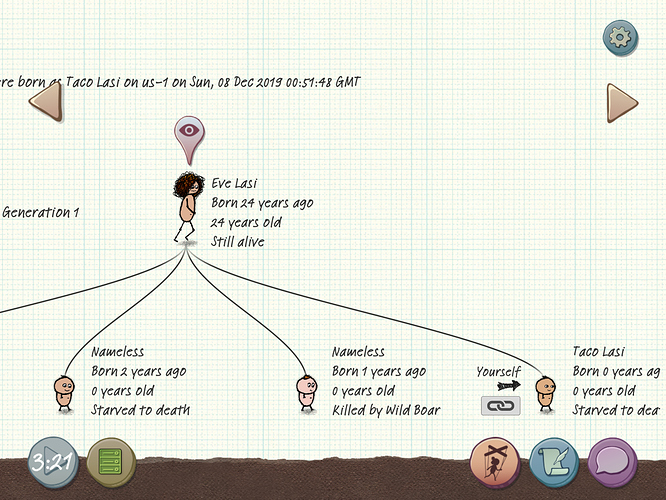 Just a reminder, this game started out as a family based survival game, that’s what everyone was promised when purchasing the game. It wasn’t intended to be a solo game.

Solo play made the players that wanted to play with others confused and sad. They keep getting abandoned by their mom over and over again. Also it takes up the resources that all players payed for.

Also solo play strongly relies on the server being almost empty, if more players join EU server for a long period of time boosting the population to the same as US beginners you will likely lose your town.

Private servers was requested by solo players, because as long as you are on public server you have the risk of your town being broken in and destroyed.

No kids server is a middle ground that you get to focus on gameplay and meeting new people without caring for babies. There’s a tight community that maintains the spawn point on both En and Jp no kids now.

How about take away consequences for suiciding and baby abandonment and have it be as it was before, because players have the right to play with who they want and they have the right to Solo Play if they want and everyone has the right to play how they want to play especially since we have all bought the game, which you seem to have forgotten or don’t care. And the flower placing on the home marker should be enough to respawn and should be enough to respawn an unlimited amount of times even after doing just once even if it was many lifetimes ago and can only be changed if u place a flower on a different home marker. And let’s be honest, you made the walls turn into ruins and eventually disappear so that people can’t Solo Play and so their home is not safe from greifers. Stop forcing us to play how YOU want us to play the game. And I also know that all of this is a HUGE tactic to force us to rent a Private Server even though everyone who has downloaded the game has paid you money already. Which is wrong, selfish, greedy, self centered, self entitled, and corrupt.

This game is now unplayable to me and others. I refuse to play the way YOU want me to play. I should be able to play how I want to play especially since again, I paid for the game. So now I shall spend it greifing on people who aren’t my friends, or people I like, or friends of friends who are good people. I know other people who r also greifing because of this. Before this update they kept to themselves in their home or a friends home Solo Playing. They also spent a little time in the No Children server to play and help out before that server was trashed by greifers. They are good people and wouldn’t be spending their time greifing if not for the update. It is a protest and showing others how bad this update is for those who are still ignorant and think it’s a good update. And of course I enjoy doing it to people who I think deserve it, so do my friends. It’s fun doing it to people who we think deserve it. And again, since the game is unplayable to us this is the only thing we can do that is fun. If it wasn’t for the update, we wouldn’t be doing this. Er, well, I don’t know about my friends, especially one of them, but I know that if it wasn’t for this update, they’d only be doing it to people who really, really, really deserve it. I on the other hand suicide as to not play with them and I greif on people who deserve it when I feel like it, which isn’t always, or if they really P word me off. But now with this update, this is pretty much all we’ll be doing when playing this game, I’ll of course just let myself die at age 3 for people who are my friends, people I like, and people who are nice so they don’t feel greif and will continue on my greifing way. For my friends and I, with this update, it’s either greif, or boycott the game and stop playing.

You were silenced by the forum system for getting flagged too many times, which I have manually unsilenced you☺

I’m sorry. Would you please point out your key idea? Like your feedback and the current issue? I’m kind of lost since the words are messed up.

I have a few questions about the new mechanism.

Chrisstoffer confirmed in a previois post that you dont have to live untill 60 anymore to respawn at your own homemarker.

I dont know if it has to be your previous lives bones but it should be a lot harder to encounter your own bones since they now despawn a lot quicker so unless its in an unloaded area (like a stone biome far away from town) then its likely to despawn by the time you are reborn to that family.

Question:
So we need to bury our bones every life before they decay in order to keep rebirth active?

I was thinking that if it just random bones of our previous lives, there’s might be easier to come back to our old village. We just need to meet our bones from any lives.

The words are not messed up. And my key idea was to respond to Ember with blunt honestly. And almost all my feedback has been flagged, including some in this topic that were here before that last message you saw and responded to. So unfortunately, you will not be able to see it because of the stupid censorship and the control freaks who censor and silence people. Again, they’ll just censor anyone who is being bluntly honest especially if that includes criticisms. This might even get flagged. They all want you to kiss their you know what’s and to say what they want you to say and say nothing but positive stuff and thanks you’s or just stay silent and not talk at all.

But Christopher, Mandrake, and the players that flagged me are control freaks and obviously don’t like me.

To be clear: I have neither flagged you nor done any of the other things you accuse me of.
How can I like you if I know nothing about you? You have been playing the game for almost a year, but never once offered any ideas or feedback in this forum. Until two days ago, when you started forum bombing. If someone you have never seen before greets you in the street with a punch in the face, would your reaction be “I like this person?”

That doesn’t mean I dislike you, though I don’t like the way you have expressed yourself. Please stop talking about the people here and how we are and concentrate instead on what you have to say to help make the game better.

If you think the game is not worth what you paid for it, then I will refund you the money and consider your playtime since January a gift.
If that is what you want, just let me know.

But stick to the forum rules - they apply to everyone here.

If they hold you to one years old then you could survive if you instantly get to and stay at a perfect temp until you turn three. The green temperature. But you will be at 1 food tic likely.

Other than that i don’t believe there’s any other way to survive sorry. Usually you can find perfect temp at the corner of snow and desert bioms or green and desert.
Also midle of jungles are usually always green if your naked so as long as you dodge the mosquitos you will have the highest survival chance because of bananas

Its permanent in the sense that you are able to return to that homemarker the next life after your buried everytime. Even if that homemarker is removed by another player or if its been weeks or even months since you made that marker you will be either spawned at it or born to a nearby female player as long as you get buried.

Wow…That is just too over. Just want you know, I can easily open the hidden part. It seems your comments are crowded with many S/F words which are not suited for younger users. Please do not injure peaple based on the subjective feeling only. I think Chris and developers have mixed many unreasonable parts, and they’ve devoted a lot to understand us. Right?