The griefing problem is on my mind these days (as usual). A while back, I floated some ideas about countering the griefers, but there was pretty hard pushback from some of the players. (you can read the topic here: Help us make griefing harder to do / 荒らし行為を難しくするお手伝い募集).
Now I am back with some new ideas (as always incorporating ideas from forum posts) and want to hear your feedback again. Note that these are pretty major in terms of coding work, so they wouldn’t happen over night. It’s better to reject an idea early rather than after we have put a lot of effort into it.

So, here are some ideas I am interested in exploring:

These are just ideas at this point, so let’s discuss pros and cons about them, shall we?

16 Likes
Release 2.15.0, What's New? / バージョン2.15.0とは
New anti-griefer tools: action log / 荒らし対策新ツール：アクションログ
Appeal to join the account mechanism, otherwise it is the village of despair
I worried this problem about griefer,The dual decade should be taken seriously on this issue
Im so mad because of griffer
Heidi_van_Bergen February 18, 2020, 5:19pm #2

To me idea 1 and 4 do make sense the most. Thanks for coming up with all six ideas!

I recommend numbers 1 and 2.
To avoid the full griefer, run 1.
The downside is that players recognize each other.
The part that there could be more dialogue than progress.
2. Curse even if you can see the past
If you have already used it or have fewer residents,
cannot be deported
But if there’s a lot of residents,
That’s a great plan♥
Plus+
Why is there only a curse button?
Why don’t you have a compliment button?
It would be more fun if I could get a compliment.
And finally, I like all your ideas, and the way you do it♥ thank you♥

There are two community suggestion for a compliment button:

For #1 i feel like while it would be good for stopping griefers it will take away from some factors of the game for example you would always know if your born to a good player or not or new players wont have a fun time when they randomly do realy good from learning something new because every body will still think “oh its that dumb noob” when they see them and treat them like a noob or even run away from them.

But i think it would be a nice touch if user identifiers were used in the action logs so that established towns could combat griefers.

For #2 the action logging i think a good way to examine of someone is griefing would be if a player gets cursed all their actions in the log gets highlighted like the black cursed text. It should also indicate how many active curses they have on them.

It should have tabs based off of actions to with like actions. For example (animals slaughtered/animals fed) (10/2) so it would mean the player slaughtered 10 animals but only fed two animals indicating they culled a large number of animals without feeding very many baby animals.

#3 i think it should be that if you tap the players name in the logs it would bring up only their logs. But players who have active curses on them cant use the logs.

#5 i honestly would like to be able to banish at least once every life but that could be abused if three griefers teamed and lived just long enough to be able to banish so how about if a player survives to 40 it refreshes their banish tokens while players who cant survive to 40 under normal circumstances would still have to wait untill 2 hours. Of course they shouldn’t be able to use two curses in one life by banishing before and after 40 years 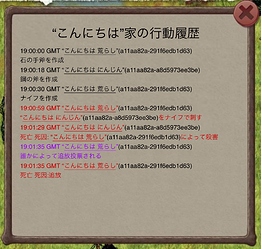 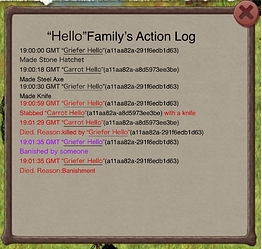 I Like Suggestions 1-4. I would also suggest to give eves more Ban Power. I would Like to be able to “Claim” a new area with a permanent Home marker. A Eve could start a town there and Others can have permanent Home Markers Like before too. But only the Eve who “claimed” the area as first one is able to banish people with one ban from her area. The people would be banned, but not to donkey town. They wouldn’t be able to come to the area again but can be born or spawned somewhere else. This should prevent innocent people being banished to donkey town by griefer eves. I think it would be good while planting a flower to a marker, a Message would Show up saying that you claimed the area now or If already taken it could just welcome the new citizen to the area. So people know that this area is taken or Not.

I think all six of your suggestions are good, and I especially support those of 1 and 2.
Also, I think number 3 and number 6 must be together.
In some cases, the individual does not move, but the group of people in the gefer activity may form a group and team up or work together to move.
They get together through social media and make plans to attack certain villages or certain people. If numbers 3 and 6 don’t work together, there’s a chance that good users will be deported, so please be sure to consider the benefits.
I think expulsion points are needed at least one point per hour.
If more than one griefer appears in the village, or if one appears in a row, the expulsion point was not sufficient. I ask you to think about these points.

I think it’s a very good idea.
I think 1 and 4 are very attractive.